The Great Movie Ride was an attraction at Walt Disney World's Disney's Hollywood Studios theme park in Orlando, Florida. It is a dark ride which takes guests through scenes from famous films throughout motion picture history. The ride is located inside a recreation of the famous Hollywood landmark Grauman's Chinese Theatre. The Great Movie Ride brings some of Hollywood's most well-known movies to life and puts those riding the attraction in the middle of the action. About half-way through the ride, guests of the Walt Disney World Resort are transported aboard the Nostromo, where they not only see a terrified Ellen Ripley, but also the Alien from the 1979 film Alien, itself. The queue also features a large movie screen, where guests waiting to board the ride can view a brief trailer for the film, along with those for many others. On August 12th 2017, Disney made the tough decision of closing down The Great Movie Ride forever and was replaced with Mickey & Minnie’s Runaway Railway which first opened in March 2020.

"Hey look, pal, I ain't no victim!"
—Mugsy to the narrator after hearing him state that a terrifying creature waits somewhere in the ship to claim its next victim.[src]

The ride vehicle has been hijacked by a gangster by the name of Mugsy (If you were lucky, another version of the ride had your vehicle hijacked by a bandit). Along with the riders, Mugsy/Kid Carson drives the vehicle aboard the Nostromo over the course of the ride. Questioning what this is, a narrator then speaks to the guests and states they are aboard the Nostromo with Sigourney Weaver. He goes on to explain that something has gone wrong, and that one by one the crew members have been vanishing. He then states a deadly creature waited within to claim its next victim, Mugsy retorting that he "ain't no victim." The narrator's last words warn the riders that the area they are approaching is extremely dangerous, to proceeded with caution, and to remain in the ride vehicle. Riders will then pass a terrified Ellen Ripley as an alarm sounds and a computerized female voice states that the ship's emergency destruct system has now been activated. The voice begins to count down, just as Mugsy and the riders in the front of the vehicle are attacked from the ceiling by the Alien. Mugsy then points out the creature's second attack, the Alien emerging from the wall and attacking the riders in the back. The ride vehicle then exits the Alien segment, with Mugsy stating that "that was enough creepy-crawlies for one day." 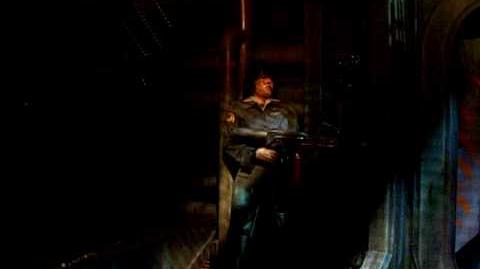