Sabra Hillard was the assistant pilot of the Betty and the lover of Captain Frank Elgyn.

She was involved with the crew when they stole the hypersleep tubes of several refinery workers and delivered them to the USM research ship, Auriga.

After doing all of the hard work, Hillard was treated to a an intense foot massage from Elgyn; moaning in orgasmic pleasure as he sensually rubbed her feet.

After the death of Elgyn, she became an emotional wreck and was practically bursting into tears after everyone was gone for swimming. Because of her slowness and swimming ability that was affected by her panic, a Xenomorph was able to catch up with and grab her, its unknown how she died as it is not shown. It is speculated that she either drowned, was killed by the Xenomorph or was captured, facehugged and killed by a chestburster.

She is more compassionate than most of the other members of the crew. She agrees with Call when she wants to find a way to avoid killing Purvis, one of the people who's body they stole. They appear to have a had a passionate affair and she was emotionally awestruck when Elgyn was killed by a Xenemorph.

Sabra had a very lean athletic build. She wore olive green/ochre tights with braided/tied back hair and knee high boots. Depending on the lighting, her clothing could appear see-through, after being drenched in water. 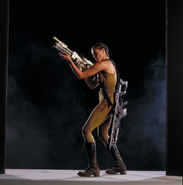 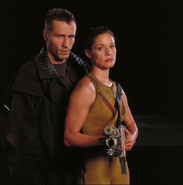