Scott was born in South Shields, England, the son of Elizabeth and Colonel Francis Percy Scott. He was raised in an Army family, meaning that for most of his early life, his father — an officer in the Royal Engineers — was absent. Scott's older brother, Frank, joined the Merchant Navy when he was still young and the pair had little contact. During this time the family moved around, living in (among other areas) Cumbria, Wales and Germany. He has a younger brother, Tony, also a film director. After the Second World War, the Scott family moved back to their native north-east England, eventually settling in Teesside (whose industrial landscape would later inspire similar scenes in Blade Runner). He enjoyed watching films, and his favorites include Lawrence of Arabia, Citizen Kane and Seven Samurai. Scott studied in Teesside from 1954 to 1958, at Grangefield Grammar School and later in West Hartlepool College of Art, graduating with a Diploma in Design.

Working with Alan Parker, Hugh Hudson, Hugh Johnson at RSA during the 1970s, Scott made television commercials in the UK including most notably the 1974 Hovis advert, "Bike Round" (New World Symphony), which was filmed in Shaftesbury, Dorset.

The Duelists of 1977 was Ridley Scott's first feature film. It was produced in Europe and won a Best Debut Film medal at the Cannes Film Festival but made limited commercial impact in the US. Set during the Napoleonic Wars, it featured two French Hussar officers, D'Hubert and Feraud (played by Keith Carradine and Harvey Keitel). Their quarrel over an initially minor incident turns into a bitter, long-drawn out feud over the following fifteen years, interwoven with the larger conflict that provides its backdrop. The film is lauded for its historically authentic portrayal of Napoleonic uniforms and military conduct, as well as its accurate early-19th-century fencing techniques recreated by fight choreographer William Hobbs. It is also lauded for the stunning cinematography of the Dordogne.

Scott's box office disappointment with The Duelists was compounded by the success received by Alan Parker with American-backed films — Scott admitted he was "ill for a week" with envy. Scott had originally planned to next adapt a version of Tristan and Iseult, but after seeing Star Wars, he became convinced of the potential of large scale, effects-driven films. He therefore accepted the job of directing Alien, the ground-breaking 1979 horror/science-fiction film that would give him international recognition.

Scott has been nominated for three Academy Awards for Directing, as well as Golden Globe and Emmy Awards. He was knighted in the 2003 New Year Honors. In 2011, Scott received a star on the Hollywood Walk of Fame. 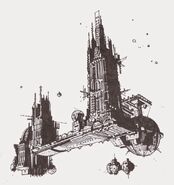