Operation: Aliens was a multimedia brand created by Kenner Products to promote merchandises based on the 1986 film Aliens, configuring elements derived from the film to be more child-friendly in order to better suit the targeted demographic. In addition to the toyline, it also included other miscellaneous merchandises, such as Jigsaw puzzles, plaster molding set, board game, toy case, watch, and various other collectibles.

Kenner produced three animated commercials that would have been used to promote the Aliens toyline, depicting the Colonial Marines fighting against the Aliens in a battle for control of an unnamed space station. The commercials were directed and produced by veteran storyboard and comics artist Will Meugniot during his time working at Graz Entertainment in 1992.[1] The animated commercials were created by AKOM Production, a South Korean animation studio (among their notable resumes include Animaniacs, The Simpsons, My Little Pony, Batman: The Animated Series, The Transformers), and utilized the same team that was working with Meugniot on the animated Conan the Adventurer and X-Men series. Although said animation, titled "Marines", had been finished it ended up not being aired on television. Instead Kenner opted to go with live action trailer, utilizing the new snorkel camera at the time to film the toys with unprecedented clarity.

Frames from the finished animation (see below) were uploaded on a long-defunct site devoted to Korean animation along with a promotional poster for the 1994 Operation: Aliens board game, leading to long-running speculation that the animation was a scrapped pilot for an Aliens animated series. In April 2018, Meugniot, put up a listing for a storyboard for the second commercial on eBay and explained in the description that the animation frames are from the toy commercials.[2]

In addition on May, 2017, Jimbo X of The Internet Is In America spoke to former Fox Kids executive Margaret Loesch, asking her on the existence of an Aliens animated series. Loesch denied such a thing exists, explaining that Fox Kids never ordered a pilot episode, nor did the idea for an Aliens series even originate from the studio. She also cited that it was Kenner that approached Fox with the idea of doing the series to coincide with their action figure releases. Though Loesch couldn't recall the time the series was ever pitched to Fox Kids, she stated that if there were discussions to greenlit the animated series it probably would have been turned down, expressing concerns that the source material was an R-rated property and the studio would have had to modify the series to make it acceptable to broadcast standards and practices. Another factor was that Fox's theatrical division did not want Aliens to be turned into a "children's property" at that point in its life.

Originally released by Kenner in 1992, the toyline figures are split into two "factions" — Lieutenant Ripley and the "Space Marines", and the Aliens they face. The "Space Marines" are derived from the Colonial Marines characters the 1986 film Aliens, retconning their demise from the film, such as Apone, Hudson, Vasquez and Drake. In addition, the characters are also redesign to better suit the toyline's theme. Most of the Aliens' designs are derived from real-life animals configured into their appearance. 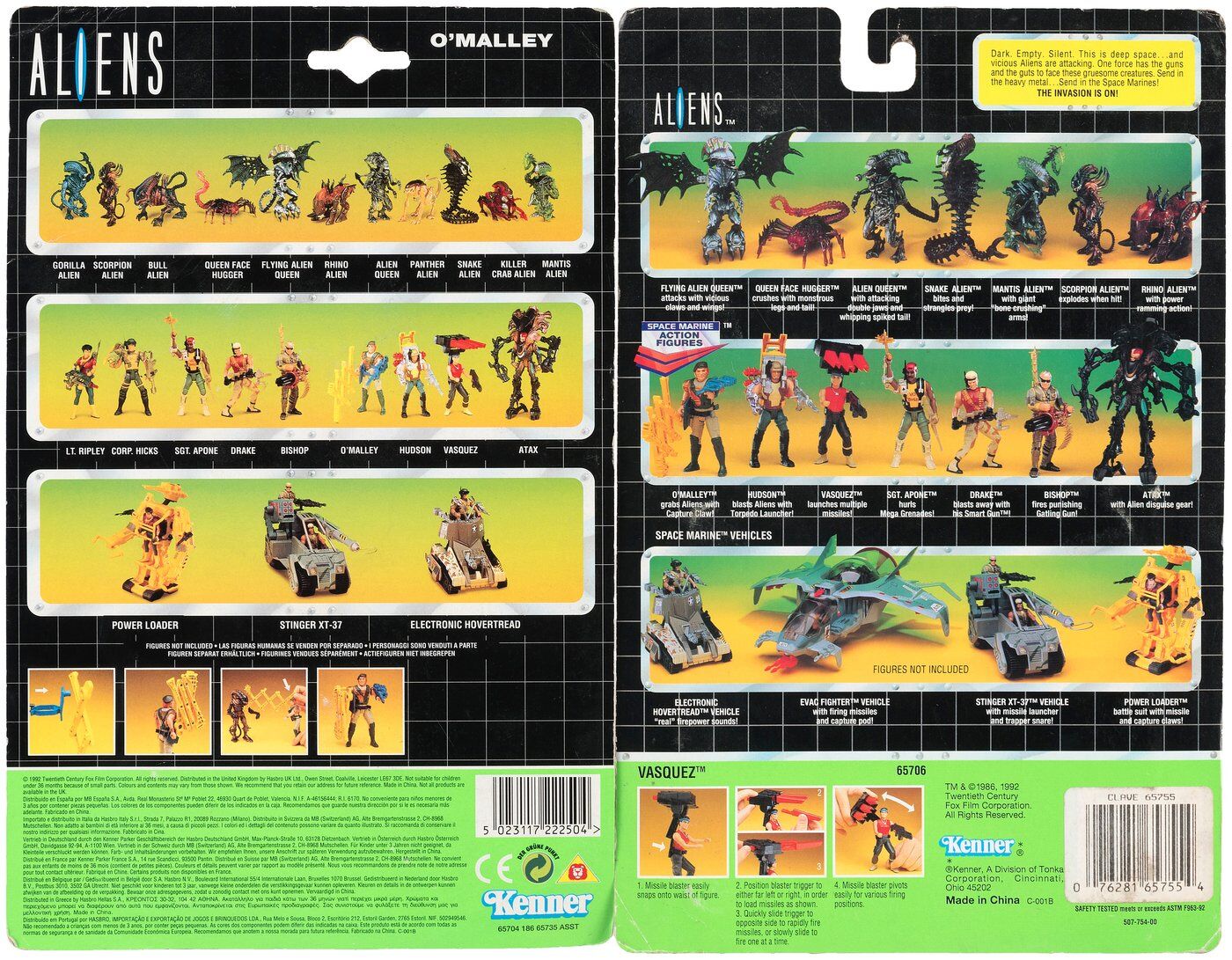 The Aliens mini-comics published by Dark Horse Comics as a tie-in to Kenner's Operation: Aliens toyline. The comics consists of 13 issues. Issues 1-12 features Ripley and the "Space Marines" combating against various Aliens terrorizing different worlds, while the thirteenth and final issue is a Aliens vs. Predator crossover.

The Operation: Aliens video game [3] was developed by Tiger Electronics as a handheld LCD, much like most of the company's other games. It was commissioned by 20th Century Fox. For reasons unknown, development for the game ceased and it was never released. There were also rumors of a mainstream Operation: Aliens video game planned to be released for the then current home gaming consoles.