The MK-Compression Suit is a space suit variant worn by the crew members of the USCSS Nostromo.

Small lamps are fitted on top of each suit's helmet, however this feature is absent on the white-colored suits. Aside from being equipped with oxygen tanks, the suits are also equipped with handy tools such as flashlights, grappling guns, laser pistols and communication devices which are used to keep in touch with the other crew members, as well as the Nostromo. 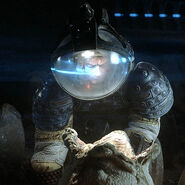