Dr. Mason Wren is a USM researcher specializing in genetic and biological research. He was given charge of resurrecting the Xenomorph species through the use of the reconstituted DNA of Ellen Ripley obtained from Fiorina 161 in the form of Ripley 8.

Aboard the Auriga, the United Systems Military was finally able to perfectly cloned Ellen Ripley after numerous failed attempts and successfully extracted the Queen embryo within her. The USM begins the repopulation process of the Xenomorphs through the use eggs produced by the Queen and impregnating the many human victims they kidnapped.

When he discovered that Call, an android member of the pirate crew of The Betty, was attempting to work on the inside to kill Ripley 8 and extinguish the Xenemorph species he attempts to have her shot as a "terrorist." Wren also orders the execution of the other pirates from The Betty for association. There is a small fight between the soldiers and the pirates. This failed and the pirates capture Wren and one of the soldiers. Wren acted as a guide until he betrayed them, shooting Call non-fatally and heading to The Betty, hoping to get there before the others and escape, stranding them with the aliens. He attempted to try to bring the Aliens to Earth. He is killed when Purvis attacks him in a violent fit of rage, forcing Wren's head to his chest moments before the chestburster emerges, killing them both.

Wren is a seemingly immoral man, having no qualms with killing innocents for the furtherance of science. Wren is confident and often smug when talking to Ripley 8. Sometimes he panders to her and other times he is genuinely interested in what she has to say. 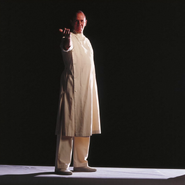