Kenner Products was an American toy company founded in 1946. Throughout its history the Kenner brand produced several highly recognizable toys and merchandise lines, including action figures like the original series of Star Wars and Jurassic Park, as well as die cast models. The company was closed by its corporate parent Hasbro in 2000. Kenner produced several toys merchandises of the Alien franchise.

Kenner released an Alien toyline, though received criticism during it's initial release from parents who are opposed to it due to the fact that Alien is a R-rated movie and thought of the toys being too frightening or ugly for children. Demands for the toys were also low since children weren't aware of the movie, resulting in only a few of the toys being sold. Over the years, the Kenner's Alien toyline became one of most sought after Alien movie collectibles due to its rarity.

The Kenner Alien toyline included a toy model of the Alien. Unfortunately the toys were poorly made and the parts are usually found loose and damaged. The back spikes often break off, especially the top center one, as well the tail, which is attached by a sharp metal ring inside the body which tends to cut off the plastic anchor. The translucent dome that covers the Alien head is often lost, which has led to a none too small market in replacement domes. The interior set of teeth, which can thrust out the the Alien's mouth by a lever, are also frequently missing. The arms are attached by rubber rings that also get brittle with age, occasionally leaving the alien an amputee. The usual poor condition of the Alien has resulted in the boxed ones selling for over $500, while the loose complete ones go for up to $300. The toy model comes with an instruction sheet, documenting the jaw opening lever, the glow in the dark brain case, and the limits of the Alien's wrists and tail.On the opposite side, the poster highlights the facehugger, Ripely with Jonesy, the sleep chamber, an opening egg, and Dallas peering at the Derelict.

Aside from the toys, the Alien toyline included several other items. Kenner released a board game in 1977 titled Alien: Game. The objective of the game is to is to be the first player to get one of your Astronauts into the space shuttle Narcissus. You also use your Alien to eliminate the astronauts of the other players. Another item included in the toyline is the much more rare Alien Movie Viewer. The movie viewer is typical of many others like it from the 1970s, the user turns a crank and a mini film strip from the film is shown. 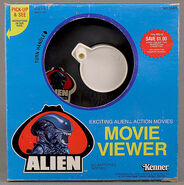 Kenner released a series of action figures and related toys based on Aliens, under the brand name Operation: Aliens to coincide with the release of the SNES Alien vs. Predator game. The action figures included several new characters along those from the films, such as Ripley, Hicks, and Hudson, but also including new Xenomorphs exclusive to the toyline. Several of these Kenner Aliens would later be repainted as KB Toys exclusives in three separate lines, including Aliens vs. Marines two-packs and the Hive Wars line incorporating previously unreleased figures.

Series 1 - When Series 1 was released, Kenner introduced to some Space Marines & Aliens figures. The Marines were Lt. Ripley, Corp. Hicks, the Bishop Android, Sgt. Apone, & Sgt. Drake. They each came with a pair of stickers and at least 1 gun. The Aliens that were introduced were the Scorpion Alien, Bull Alien, & Gorilla Alien. The Queen & Power loader Vehicle were released shortly after. All these figures, excluding the Power loader & Queen, had comics. Also, the 3 aliens were included with different colored Facehuggers.

Series 2 - When Series 2 was made, Kenner added an exclusive Space Marine & more Alien figures. These were the ATAX, that came with a Queen costume, and the Alien figures were the Rhino Alien, Mantis Alien, Snake Alien, Queen Facehugger, and the Flying Queen. It also included an AVP 2-Pack & 3 new vehicles, consisting of The Evac Fighter, Stinger XT-37, & Electronic Hovertread.

Series 3 - Series 3 included Vasquez, O'Malley, & Hudson. Sadly, they were all released only in the UK. Kenner sent many cases of these marines to North American retailers, but they denied the new Marines because the Marines from Series 1 were failing to sell. Kids were only interested with the Alien figures, so Kenner sent 36 cases back to its China division. 24 were destroyed, so only 12 cases of each Marine are known to exist. New Aliens were the Panther Alien & the Killer Crab Alien. There was originally going to be a Mini Dropship vehicle, but it was cancelled. Later that same year, Kenner released the Night Cougar Alien ( repaint of the Panther ), Wild Boar Alien, & King Alien.

Series 4 - The final series for Kenner's Aliens figures. Kenner ceased to produce more Marine figure due to its failing sales and only focused on producing new Alien figures. These were the Electronic Swarm Alien & the Arachnid Alien. Kenner also released a Queen Hive Playset with real ooze.

Hive Wars - 2-3 years after Kenner's "Aliens" demise, they released a new line featuring figures not in the original toyline. They were the Acid Alien, Hive Warrior, Night Recon Predator, Warrior Predator, an android-looking Corp. Hicks, and Integer 3, an android.

Aliens vs Marines - 4-5 years after the demise of Kenner's Aliens figures, Kay-Bee Toys made repaints of some of the marines with Aliens in sets known as the Aliens vs Marines. There was Corp. Hicks vs King Alien, Vasquez vs Night Cougar Alien, Drake vs Arachnid Alien, O' Malley vs Queen Facehugger, and Hudson vs Scorpion Alien. 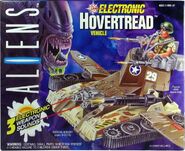 Kenner released a toyline based on Alien Resurrection in 1997 and a total of three series were released as part of the line.[1] 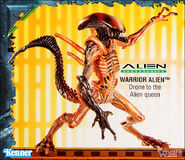 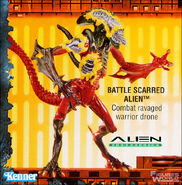 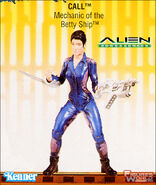 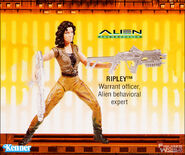 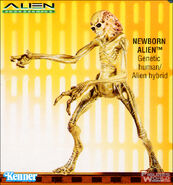 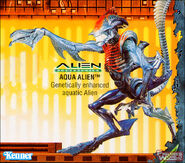