H.R. Giger was a Swiss surrealist painter, sculptor, and set designer. He won an Academy Award for Best Achievement for Visual Effects for his design work on the film Alien.

Giger was born in Chur, Graubünden Canton, Switzerland, the son of a chemist. He spoke of a father who viewed art as a "breadless profession", and strongly encouraged his son to enter into pharmaceutics. Despite this, in 1962, he moved to Zürich, where he studied Architecture and industrial design at the School of Applied Arts until 1970. Giger had a relationship with Swiss actress Li Tobler until she committed suicide in 1975. He married Mia Bonzanigo in 1979; they separated a year and a half later.

Giger's style and thematic execution have been influential. His design for the Alien was inspired by his painting Necronom IV and earned him an Oscar in 1980. His books of paintings, particularly Necronomicon and Necronomicon II and the frequent appearance of his art in Omni magazine continued his rise to international prominence. Giger is also well known for artwork on several records.

In 1998 Giger acquired the Château St. Germain in Gruyères, Switzerland, and it now houses the H. R. Giger Museum, a permanent repository of his work.

On 12 May 2014, Giger died in a hospital in Zürich after having suffered injuries in a fall.

The Necronom IV, inspiration for The Alien

A facehugger on a crewmember of the Nostromo

A later concept of the facehugger

An early version of the chestburster

Concept of the Alien 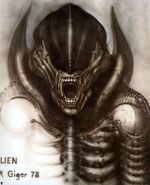 Another piece of concept art for the Alien

Giger's concepts for an "errotic" alien for Alien 3

Two cocooned alien victims from a removed scene in Alien 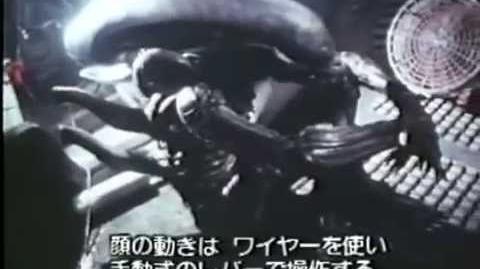