Flying Aliens are winged Xenomorph variants with the capability of flying. They are generally depicted of having large talons and membraned wings that are similar to those of bats/dragons.

Though they never appeared in any mainstream continuity, Flying Aliens made numerous appearances in other various media. Kenner's Aliens toyline included a Flying Queen. Flying Aliens have appeared in various arcades such as Aliens, where there were Drones with membraned wings and Chestburster-like parasites with the same attributes. One of the Drones can be seen kidnapping Newt and carrying her off further into the infested colony. A Flying Alien was briefly featured in the first issue of Aliens: Survival, however this Alien was merely a figment of Victor Thompson's dream. Unlike the other incarnations, this Flying Alien is depicted of having insect-like wings.

The arcade game Aliens: Extermination featured a large Flying Alien, dubbed as the "Alien Dragon" and served as the boss of Mission 3 where it emerged from its nest and begins to attack the Marines, with the assistance of several winged chestbursters. The Marines were able to repel the Alien Dragon's attacks and finally defeated the creature. The Alien Dragon fell to its death. the latest arcade game Aliens: Armageddon included several Flying Aliens, in the form of winged Drones, Facehuggers, and Chestbursters. It also featured two Flying crested-Aliens, which served as one of the Alien bosses of the third and fourth missions. One of them made a sudden appearance and killed an Alien boss, but it was later killed after the Marines fought it off. The last one was incinerated by a rocket engine.

The Flying Alien from the 1990 arcade.

The Flying Alien about to catch Newt.

The Flying Alien from Victor's dream. 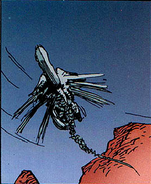 The Alien Dragon from Aliens: Extermination.