"Prometheus...are you seeing this?"
—Elizabeth Shaw upon entering the Engineering temple[src]

Dr. Elizabeth M. Shaw was an accomplished archaeologist who was assigned to assist the USCSS Prometheus expedition in discovering the homeworld of the Engineers on LV-223. Sometime after the events of Prometheus, Shaw was killed by David. She was seen on a table dissected, being experimented on. David claims she died in the crash of the Engineer ship.

A young woman of British ancestry, Shaw was raised from childhood in South Africa by her father, a missionary, after her mother died of unknown causes. Years later, she also lost her father after he had contracted the Ebola virus.

Shaw was something of a child prodigy having graduated Oxford University at the age of 17 with doctorates in paleontology, archaeology, human mythology and mimetics.

In 2089 during her expedition in the Isle of Skye, Shaw along with her love interest and fellow archeologist Charlie Holloway discover a star map among several unconnected ancient cultures. They interpret this as an invitation from humanity’s forerunners, or "Engineers". Shaw shares her discovery with Peter Weyland, the elderly CEO of Weyland Corporation, who later funds the creation of the scientific vessel Prometheus to follow the map to the distant moon LV-223. Shaw comes along because she believes that the Engineers created humanity and she desires to "meet her maker". After coming along with a team, she found the bodies of the Engineers and decided to take back the head of one. She finds out from her examinations that they share the same DNA, and thus proves her theory and beliefs. Shortly after, Shaw and Holloway make love and she is unaware he is currently infected by a alien bacteria from the black substance. She later finds out from David that she is 3 months pregnant, and immediately deduces that it is an an alien lifeform since she is sterile. Before she can attempt to remove the organism she is sedated by David, who plans to put her in cryo-sleep and take her back to Earth.

When Shaw regains consciousness, crewmembers are preparing to put her in cryosleep. She pretends to be asleep before knocking them out and escaping, feeling severe pain from the movement of the embryo. She attempts to use Vickers's unique medpod to perform a Caesarian section but finds the pod is calibrated for male patients only and thus cannot perform the procedure. Shaw is forced to improvise and manages to instruct the pod to remove the embryo by using a setting for foreign biomasses. As she begins the procedure the embryo begins to move more violently. The pod manages to cut it out of her successfully. When the embryo emerges, it is the first, early developed facehugger, and it is immediately violent and flails around, attempting to attack Shaw, but is restrained by a mechanical arm. Shaw quickly has the pod close up her abdomen with medical staples and attempts to kill the embryo by activating the pod's decontamination procedure. Shaw believes the creature dead after this. While escaping through the corridors of the Prometheus she enters a room and finds out that Peter Weyland was secretly aboard the ship the entire time and has been giving David orders. Despite her ordeal, Shaw goes with David and Weyland to the dome and into the ship, where David revives one of the Engineers. The Engineer responds to David's attempts to speak to it by decapitating him and kills everyone save Shaw, who escapes and tells Janek to stop the ship by any means, which he does by ramming the ship with the Prometheus in a suicide attack. Vickers lands nearby in a small escape pod, her own, larger escape pod (containing the med-pod) having jettisoned already. The Engineer ship crash-lands and begins falling over, crushing Vickers before settling. Shaw heads for the larger escape pod, which contains enough supplies to last for 2 years. After getting to the escape pod, Shaw discovers that the squid-like alien has grown into a monster and when she is attacked by the Engineer she releases the squid-like alien, which restrains and impregnates the Engineer while Shaw escapes.

Devastated, she escapes the pod. But she is contacted by David's head, who assures her that there are several other Engineer ships on LV-223, and that he can navigate them. He offers to return Shaw to Earth but she refuses and instead decides to head to the Engineer homeworld to find out why they chose to create humanity and suddenly destroy it. After recovering David's remains from the crashed Engineer ship, the two activate another Engineer ship and leave LV-223 for the Engineer homeworld. As they leave, Shaw narrates and sends a transmission of the last log of the Prometheus to keep others away from LV-223. 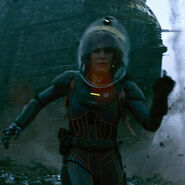