Christie was Frank Elgyn's right-hand man onboard The Betty.

He was involved with the crew when they stole the hypersleep tubes of several refinery workers and delivered them to the research ship USM Auriga. During the Xenomorph outbreak, he assisted the crew in getting to the Betty by serving as a backup leader when Elgyn died. Later, when the crew was forced to swim through a flooded part of the ship, Vriess was asked to 'lose the chair' and Christie strapped his fellow crewmember to his back. Christie is assumed to have been killed by Xenomorphs after being burned by their acid blood and dragged underwater.

Christie was the most stable crew member and had good leadership qualities. Christie also was prepared for tense situations, such as when he brought two concealed pistols on to the Auriga. 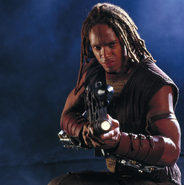 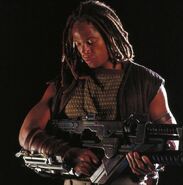 Add a photo to this gallery
Retrieved from "https://alienanthology.fandom.com/wiki/Christie?oldid=16994"
Community content is available under CC-BY-SA unless otherwise noted.