Balaji Imperial was a brand of cigarettes in the 22nd century and came in packs of 20 cigarettes.[1]

Balaji Imperial cigarettes were smoked by the crew of the USCSS Nostromo. One pack can be seen on Lambert's cockpit, while another pack was seen on the Nostromo's dining table during Kane's "last supper".

The name of the cigarettes is possibly a reference to Bolaji Badejo, the actor who played the Alien. "Balaji" is a combination of "Ba", from his last name, and "laji", from his first name. According to Ivor Powell, Alien's associate producer, "Given that Balaji is the Christian name of the guy that played the Alien, I reckon that it could be a kind of in-joke between Art dept and Ridley [Scott]. However, it looks like a close-up/insert shot and I wonder when it was shot, because I only discovered Balaji during the main unit shooting and given that we shot the command module/cockpit sequences right at the beginning of the main unit schedule – then nobody would have heard of Balaji at that point. Maybe we shot this insert after main unit shooting had finished – but I don’t remember doing it."[2] According to Ridley Scott, Alien's director, "In the cockpit, there’s a pack of cigarettes that says ‘Bolaji.’"[3]

It is believed that the base of Lambert's Balaji packaging and the cigarettes themselves were French Gitanes "papier maïs" cigarettes. In the Japanese Alien program, a picture shows a pack of Gitanes cigarettes in Kane's cockpit in the bridge, but the pack is never seen in the film.

Interestingly, in Blade Runner, another film directed by Ridley Scott, Boyards were used; Boyards are also French "papier maïs" cigarettes and are very similar to Gitanes, but Gitanes are thinner. Additionally, Gitanes Vizire cigarettes' packaging used a very similar design to that of Boyards Corporal's. 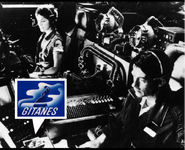 The image showing Kane's Gitanes from the Japanese Alien program.