Amanda Ripley-McClaren is the daughter of Ellen Ripley. She was ten years old when her mother goes away into space, following the loss of the Nostromo. L t

15 years after her mother's disappearance, Amanda was contacted by Weyland-Yutani employee, Samuels, who gave her information regarding her mother's possible whereabouts. Amanda joined the search team to locate her mother which eventually lead her to Sevastopol, a decommissioned trading space station. Onboard, she encountered a Xenomorph Drone that proceeded to hunt her throughout the station.

She died at the age of sixty-six; fifty-six years after her mother goes off to space and two years before her return. Sometime before her death she married, taking the name McClaren, but had no children. 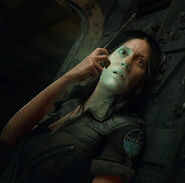