Aliens is a 1990 arcade game published by Konami and based on the eponymous 1986 film. The game is designed by S. Okamoto and his team. The game, alongside the Alien vs. Predator arcade have became famous because its characters and stages have been converted and used for the fighting game maker program M.U.G.E.N.

Hadley's Hope have lost contact with the Weyland-Yutani staff, so Colonial Marine troops of USS Sulaco decided to send their team to investigate. Players take the role of either Lieutenant Ripley or Corporal Hicks as they fight their way through aliens, before killing their Queen, which is stowaway on the Sulaco. Three of the levels also featured Newt, where the players must rescue her from aliens.

The game is a side-scrolling run and gun (or shoot 'em up) where the players made use of the M56 Smart Gun as the players' default weapon. Players can also pick up rocket launchers, flamethrowers, and laser-improved weapons. Players can either crouch or stand while shooting. Players can also throw bombs by pressing both buttons simultaneously. The game has six levels, with some of them being based from the film. In some levels players can use power loaders, which are strong enough to kill an alien in one hit.

Aside from Warriors, Queens, Facehuggers and Chestbursters, Konami decided to make their own type of Aliens; these are unique, but also strange: some can fly, others can shoot lasers and static electric rays, some will even will grow when shot and later explode, while some resemble spiders. There are also infectoids, which reappear in the AVP arcade game. One also has tentacles and it is encased in resin. Another can throw harmful "bubbles", which apparently contain Facehuggers. There's also a "spinner", which can spin and shoot bubbles of acidic spores.

The game's Japanese version beared a series of differences, such as enemy colors, lack of APC levels, and the names for each levels are shown before they start. 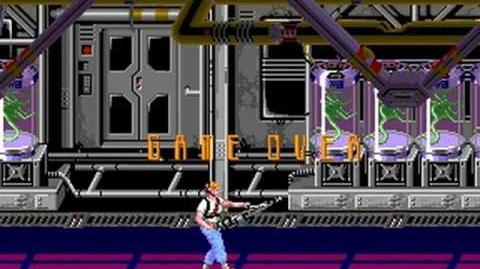 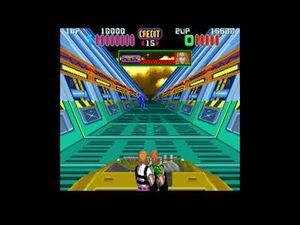