Alien: Covenant is a 2017 film directed and produced by Ridley Scott and written by John Logan and Dante Harper, from a story by Michael Green and Jack Paglen. A joint American and British production, the film is a sequel to Prometheus (2012) and is the second installment in the Alien prequel series and the sixth installment overall in the Alien film series, as well as the third directed by Scott. The film features returning star Michael Fassbender and Katherine Waterston, with Billy Crudup, Danny McBride, and Demián Bichir in supporting roles. It follows the crew of a colony ship that lands on an uncharted planet and makes a terrifying discovery.

Shortly after his activation, David is interviewed by Peter Weyland in a palatial lakeside apartment after observing Michelangelo's statue. Weyland states that one day they will search for mankind's creator together. David comments on his own unlimited lifespan as compared to Weyland's, which unsettles Weyland.

Many years later after the Prometheus expedition, the colony spaceship Covenant is en route to the planet Origae-6, carrying over 2,000 colonists in hypersleep, and 1,140 human embryos. Years later, still seven years four months from its destination, the vessel is struck by a neutrino blast from a nearby stellar ignition, causing major damage and starting several fires on board. In response to the crisis, the ship's crew of 15 are awoken from hyper-sleep by Walter, an advanced android model that physically resembles David, but Captain Branson is incinerated inside his cryotube when it fails to open. The surviving crew manages to bring the disaster under control, although 47 colonists and 16 embryos are lost alongside their captain. During one of the repair sessions, Branson's wife Daniels talks to Walter about a cabin Branson desired to make on the new planet, which Walter keeps to memory.

The Covenant's first officer Chris Oram takes over as captain and command of the mission. While undertaking a spacewalk to conduct exterior repairs, pilot Tennessee picks up a fragmented, distorted transmission through his suit's communications systems. When the message is analysed on board, the crew are able to discern an unidentified human humming a folk rock song (John Denver's "Country Roads") within the image. When they trace the rogue transmission to its source, they find it originated from a nearby planet perfect for human habitation, better even than the predictions for Origae-6. Presented with a seemingly perfect home just a few weeks away and with none of the crew wanting to re-enter hypersleep after witnessing Branson's death, Oram elects to investigate. Daniels officially protests to him, but is overruled.

Upon reaching the uncharted world, Tennessee, Ricks and Upworth stay on board the Covenant in orbit while the rest of the crew heads to the surface in a dropship to explore. They discover a verdant world developed in vegetation, but mysteriously empty of animal life. As they explore, one of the security team, Ledward decides to take a cigarette break, but steps on some small pods, causing tiny dust-like bacteria to enter his ear unnoticed. Further searching leads the ground team to a crashed Engineer ship, inside which they find a tag belonging to a "Dr. E. Shaw", as well as the source of the transmission they received.

The expedition is cut short when Ledward suddenly becomes rapidly and violently ill. Oram's wife Karine rushes him back to the dropship where Tennessee's wife Maggie quarantines them inside the med-bay. Moments later, an albino, pale creature known as a Neomorph erupts from Ledward's back and attacks Karine where it mauls her to death. Maggie returns and attempts to kill the creature, but accidentally shoots several flammable tanks on board the ship, triggering an explosion that kills her and destroys the craft, but somehow the Neomorph escapes. Outside, nearby in the fields, Hallett is killed as a second Neomorph erupts from his mouth after he too was infected by the pods when another cloud of bacteria entered his nose.

The Neomorphs, already grown exponentially larger, soon return and attack the crew on the ground. Ankor is killed by one of the beasts and Walter loses his hand, saving Daniels. The armed security team managed to kill one of the monsters, but the second Neomorph retreats after a mysterious hooded figure appears and fires a bright flare. Unable to contact the Covenant due to ionic interference and with the ship unable to breach the planet's powerful atmospheric storms anyway, the crew follow the figure. He leads them to a nearby ruined city, scattered with the bodies of dead Engineers. Upon reaching a vast temple at its center, the figure reveals himself to be David, who survived the Prometheus mission. He explains that he and Shaw came to the planet ten years previously on board the Engineer ship, but its cargo of weaponized black liquid accidentally deployed over the city when they arrived, annihilating all fauna and infecting the planet. The Juggernaut then crashed, killing Shaw and leaving David alone.

After the crew members tell David of their mission, they attempted to contact the Covenant, but are stymied by ion storms while David hangs out with Walter. Later, the surviving Neomorph, now fully-grown, infiltrates the temple and mutilates Rosenthal. David finds the creature feeding on her corpse and tries to communicate peacefully with it, but is horrified when Oram interrupts and kills the Neomorph with gunfire. Oram questions David, demanding to know the truth about his actions on the planet, but David leads him to a laboratory where he presents his efforts to genetically engineer a superior lifeform from the creatures spawned by the black liquid. He leads Oram onward into a chamber in the lower levels of the temple, where several eggs of his creation live. One of the eggs opens and Oram is subdued and impregnated by a Facehugger that emerges when he got too close.

Hours later, David waits and watches as Oram recovers, but is killed when a Chestburster erupts from his chest, fascinating David. As the others search for Oram and Rosenthal, Walter finds Shaw's dissected corpse, used by David as material for his evolving creature designs. David states that his designed creature is a "perfect organism". When Walter disagrees, David disables him. Meanwhile, Sergeant Lopé is attacked by a Facehugger while he and crewmate Cole are looking for Oram and Rosenthal, although he is saved when Cole cuts it off him, but Lopé's face is burned in the process. Cole is then suddenly killed by a fully grown different species known as a Protomorph while Lopé flees.

Elsewhere in the temple, Daniels confronts David, correctly guessing that Shaw did not perish in the crash. David confirms that he killed Shaw during his experiments before attacking Daniels, although she is saved by Walter, who was able to self-repair himself. The two androids engage in a fierce duel as Daniels flees where she meets up with Lopé. Daniels and Lopé manage to contact the Covenant and Tennessee launches a rescue in the ship's cargo transporter sled. Daniels, Lopé and "Walter" make it on board the small ship, although they are pursued by the Protomorph unnoticed. Daniels battles the creature on board the flying craft until she kills it by crushing it to death in the vessel's remote crane.

Upon returning to the Covenant, the survivors prepare to re-enter hypersleep. However, Daniels and Tennessee find out that a second Protomorph had erupted from Lope's chest and killed him before it is loose on the Covenant. After maturing, the Protomorph quickly attacks and slaughters Ricks and Upworth in the shower room, but Daniels and Tennessee manage to lure it to the terraforming equipment bay with Walter's help and guidance. Daniels traps the creature in a vehicle and orders Walter to open the doors, which he does and causes decompression that sucks everything into space. However, the Protomorph breaks out and attempts to attack Daniels, but is fatally impaled by another vehicle before it is sent flying out of the Covenant.

As they return to hypersleep, Daniels reminds Walter of the cabin Branson desired to make. When the android cannot recognize this, Daniels realizes that it is not Walter who is on board the ship with her, but was revealed to be David, who had cut off his own hand and scarred his face to assume Walter's place. Daniels cries out in vain as David activates her pod and puts her to hypersleep. Now alone on board the vessel, David enters the hypersleep bay full of colonists and looks upon the hundreds of bodies in stasis, before he regurgitates two small solidified Facehugger embryos and places them in cold storage next to the human embryos. He records a log as Walter in the end stating that all crew members except Tennessee and Daniels were killed in the neutrino blast and that the ship is still on course for Origae-6.

Ricks’ navigation display gives some interesting information. While he says the trip to ”Planet 4” is a few weeks, close examination of the display says the ETA from Covenant’s current position is 2 weeks. In the same display it also shows the ETA at Origae-6 as 362 weeks from current position. Another display on the same screen confirms Walter’s verbal statement of 7 years 4 months to their destination (the equivalent of 380 weeks). 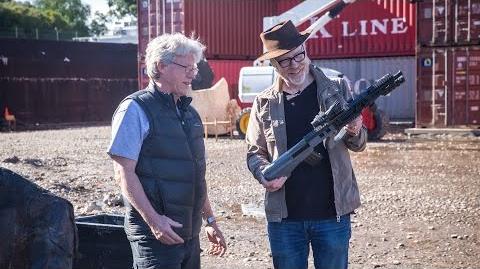 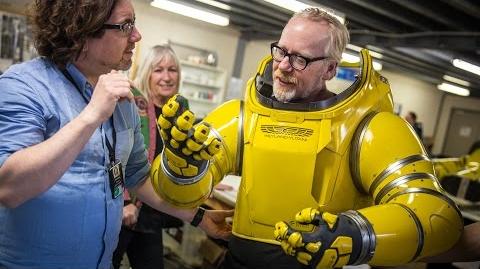 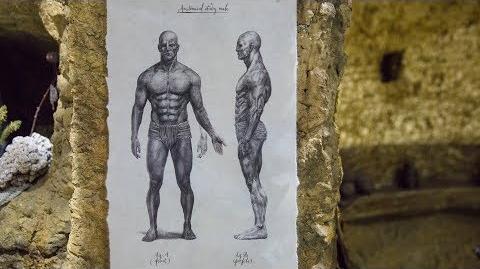 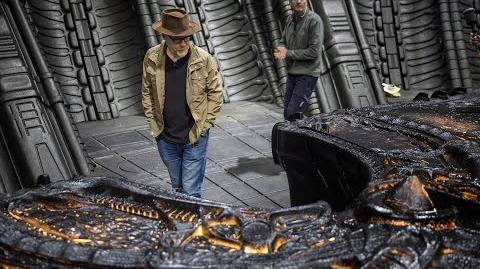 Adam Savage Behind the Scenes of Alien Covenant! 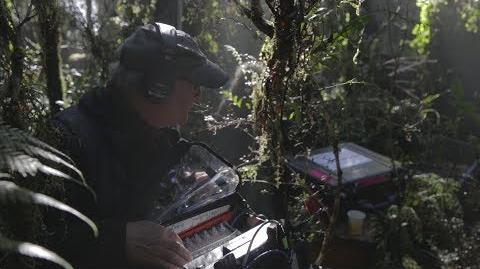 Behind the Scenes The Sounds On Set of Alien Covenant! 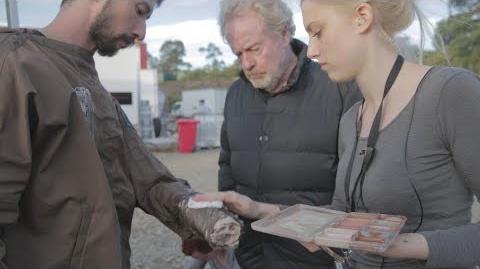 Behind the Scenes The Makeup Effects of Alien Covenant! 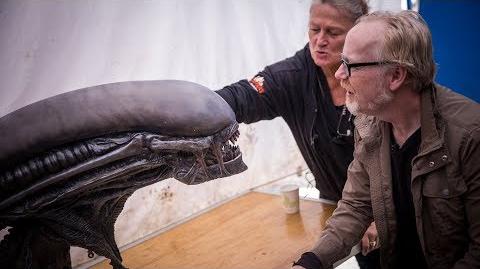 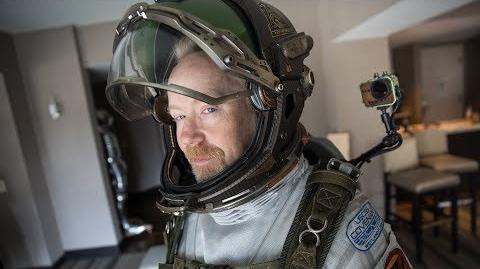