Alien: Blackout is a video game developed and published by D3 Go! and was released for Android and IOS platforms.

It is a survival horror game that uses point and click elements. Inspired by the movie Alien and starring Amanda Ripley, daughter of Ellen Ripley. In the game, Amanda will be alone along with four other crew members: Andrew Thorncroft, Miwa Saito, Dougal Studwick, and Naoko Yutani while aboard an abandoned space station with a single Xenomorph throughout the game.

Following the main events of Alien: Isolation, technical engineer Amanda Ripley is in danger on board the Mendel space station after being rescued from "a bad situation" by the crew and then brought on board. Amanda wakes up with most of the crew killed due to the xenomorphic outbreak that caused a massacre, but she manages to avoid the Alien by hiding inside the duct system between the maintenance access points.

Seeing that she is in an extremely dangerous situation in which a xenomorph is roaming the empty corridors of the already slaughtered station, the engineer sends a warning message about the presence of an extremely deadly alien organism on board. Momentarily the USCSS Haldin, on its way back to Earth, has its course interrupted when it veers out of its way to meet and dock at Mendel station. Then Amanda Ripley guides her new crew through the dark and abandoned corridors of the station while guiding them from their goals to collect pieces and adjust systems to finally make the escape from the place.

In the end, Amanda manages to save everyone or almost everyone (depending on how many stayed alive throughout the game) with the escape at Haldin and leaves a recorded message reporting that Mendel Station was destroyed and that now she and the Haldin members trace their route to Earth.

The game follows the point and click style to operate doors and cameras just like Five Nights at Freddy's, however, it has the character control mechanism when plotting its routes to complete the level.

Altogether there are seven levels of the season in which Amanda must safely guide the crew to be able to complete the objectives and reach the end point of the phase. However, the difficulty will increase with each level in which the player will face the task of guiding and giving commands to all four members and wisely distributing energy cells between doors and regions with motion sensors while racing against time. of eight minutes to complete the objectives and reach the end of the level before a blackout occurs that automatically results in a game over, Alien will also change its behavior according to its AI (similar to the Alien in Alien: Isolation) which will change as the paths taken by each member, the noise caused by the opening and closing of doors (consequently attracting him towards the noise) and the amount of commands that the player gives to the members, the latter results in an increased chance of an attack by the ducts that give access to the maintenance access point itself.

During each level, the Alien will hunt Haldin's crew while moving around using the ventilation ducts, the player will be able to control doors and even activate regional movement sensors to find the Alien's location and thus avoid a possible encounter with the crew. However, the player will have a limited number of eight energy cells that can only be used to seal doors and activate regions with sensors, Amanda Ripley will also be susceptible to Alien attacks through the ducts that give access to the point where she is, and for this, the player should pay attention to the sudden change in behavior of the Alien, who will try to reach Amanda through the ducts, to block the passages with the hatches around him. The player will also have control over the crew by sending commands such as hurry, stealth, stop and hide.

Currently the game contains a Survivor mode that can be unlocked by completing the main story and consists of the player guiding Haldin's crew through the seven levels while containing only three energy cells, there is no saves or restart option between levels, and if Amanda die or all crew members are killed, the game is over. 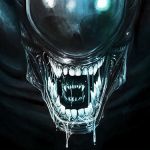